One of the hardest parts of being an author is trying to focus on the ideas you have, while new ones keep coming into focus. That was the case with the latest story that I am revealing here on my blog. It was formed from an idea I had originally based on the tales of the Brothers Grimm. When I couldn’t find a Germanic name that fitted my main character, I decided to switch to an Irish setting and build a different lore.

Without further ado, I would like to reveal to you the final cover of one of my future books. 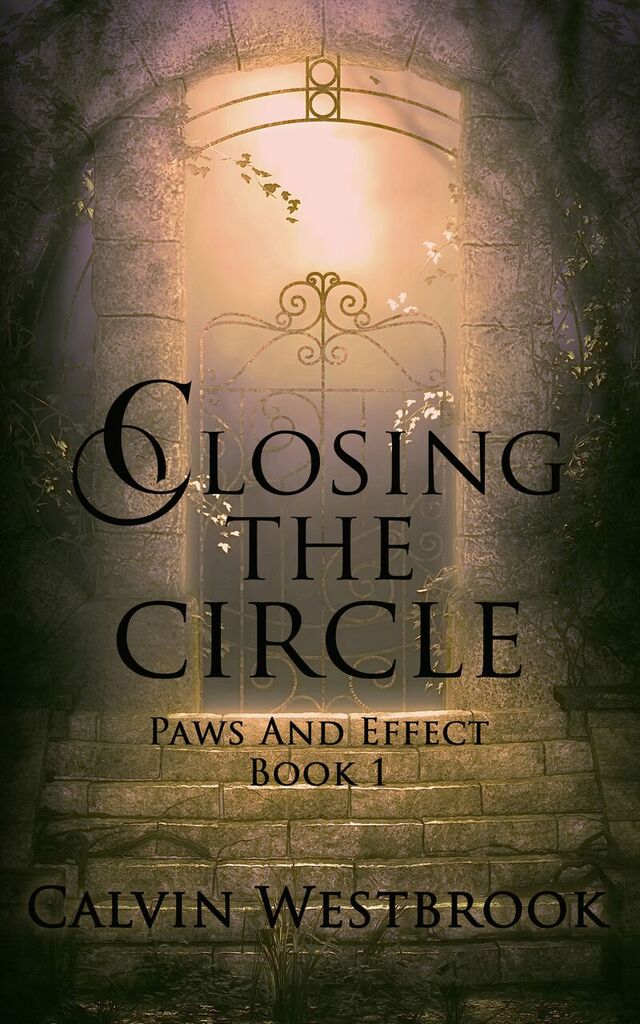 This beautiful cover for Closing The Circle, the first book in Paws And Effect series, has been designed by the talented mind of JC Clarke. If you are curious about the plot of the book, here is the blurb I have made for it.

The fur will fly when a young wizard seeks his path.

During the funeral of his estranged grandmother, a young wizard named Felix Driftwood is unexpectedly chosen to potentially become the next owner of their family spell book. Faced with bitter rivalry from his cousin William, the other potential heir, Felix attempts to return home to escape the madness that has begun to take place.

Things take a turn for the worse when he is unexpectedly detained by the local magical enforcement agency, and is then attacked by an unknown assailant. Scared for his life, Felix is given sanctuary in Talybris, a hidden world that is guarded by a pack of wereshifters who have fae lineage.

Felix is now in a race against time to solve the puzzle left to him by his grandmother and prevent his power crazed cousin from destroying their family’s legacy. On top of this, he must also try to deal with the romantic advances of Ronan LeClaine, the pack’s handsome alpha, as well as the jealousy driven actions of his devoted familiar.

As a special treat for my loyal readers, and anyone who loves supernatural fiction, here is a short sample from one of the flashbacks in the book.

For a horrifying moment, Felix wondered if he had picked the wrong kind of object. The old shampoo bottle began to spew out thick cream coloured smoke. It began to rise up towards the ceiling, and swirled around like a tornado. To Felix’s surprise, the smoke changed into a solid form of something that resembled a human male.
The being had long wine red hair, stunning orange eyes and a pair of ears that would have looked more at home on a house cat. To add to the male’s feline mystique, a large wine red tail curled out from the bottom of his back. He wore a blue vest with golden trimmings, and a golden bangle on each of his wrists. From the point that his waist would have reached his legs, a trail of wispy smoke trailed down towards the floor.
From everything that Felix understood, he thought that the man looked like a genie. It was clear that something had not gone as expected with the ritual. He had expected to find a familiar, and instead he had seemed to have gained a servant. Before he could do anything else, the “man” bowed, and looked at Felix with the deepest respect.
“I thank you for awakening me from my slumber. My name is Trenvick, and I have been summoned to be your new familiar.”
The beings voice was rich and warm, with a slightest hint of a Gaelic accent. Felix dropped the bottle and took a few steps backwards. This genie like creature was definitely a familiar? He had been expecting a talking animal who would be his teacher. Instead, he had picked the vessel of a man-animal who was now gazing at him with adoration.
Noticing his emotional state, Trenvick frowned.
“Are you not pleased with me Master? Have I done something wrong?” he asked, tears forming at the corners of his eyes. Felix looked at the man slash genie slash familiar, and his fear gave way to sympathy.
“You’ve done nothing wrong. It’s just that I didn’t expect you to be in this form. I was told familiars only took the shape of creatures from nature.” Trenvick gave a small smile.
“That would ordinarily be true. In my case, my birth was not what you would call a normal circumstance. My creator decided to choose me to be a feline familiar, and chose my bonding vessel to be the bottle of a freed genie. Little did he know, the bottle retained some magic from it’s previous tennant.”
“When I was born, I had all the powers of a familiar, as well as a small amount of magic that would ordinary be granted to a genie. That is why my physical appearance resembles the more powerful species. As a side effect of the magical crossover, I was given a few feline features, such as my cat like ears and my big fluffy tail.” Felix tried to not wear a vacant expression as he tried to absorb this new information.
“Does this explain everything to you Master?” the familiar asked.
Jumping with surprise at being addressed, Felix nodded. Trenvick’s appearance was unusual, but it wasn’t bad by any stretch of the imagination. The familiar looked slightly cautious at that moment.
“Are you still willing to have me as your familiar?” he asked.
Felix considered the question, but knew that there was only one answer. He had grown to like Trenvick in the time they had spent together, so there was no way he would send him back into the bottle.
“I guess we can make this work.” he eventually replied, with a grin crossing his face.
Trenvick gave a small chuckle.
“Thank you Master. I shall attempt to guide you with all the power that I possess.”
Felix nodded. With the power he held, the wizard didn’t doubt that Trenvick would be of great assisstance to his efforts. Wanting to prove to himself that the man was real, he walked over to Trenvick, and wrapped his arms around his chest.
The warmth he felt from the familiar was comforting, so much so that he almost never wanted to leave his side. Trenvick wrapped his own arms around Felix, and let out of a contented purr. The noise reasonated throughout the room and made both men feel at ease.

Hope you liked this cover and snippet. I will have more information about this latest book very soon, as well as more snippets from future projects.