For the second time in 2017, it’s time for me to post a snippet of an up and coming work on Rainbow Snippets. For those of you who don’t know, Rainbow Snippets is a Facebook group where you share a set of sentences from a work that has LGBT related content. If you want to check out this great community for yourselves, be sure to check them out for yourself.

This segment is from A Treasured Find series, and was co-written by AuldMisdione, the deviantArt user who helped me bring the characters of the story to life. Before we get to the sample, I thought I would share another picture that was created of Caleb and Varron, the two main characters in the series. You can find it below, or visit the original deviantArt page where it was uploaded. 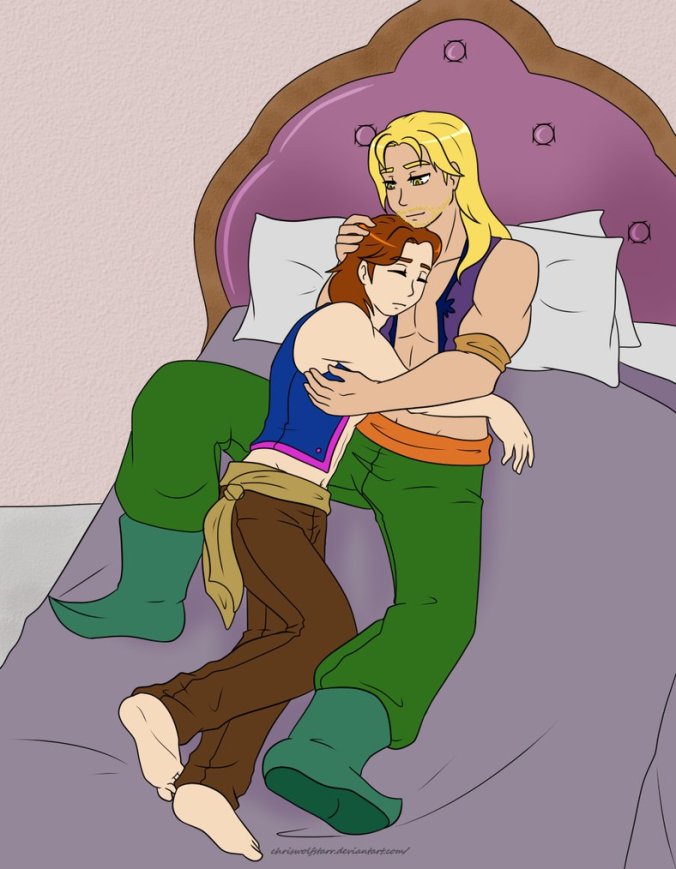 For this Rainbow Snippet, we join our protagonists during a scene where Caleb and Varron are walking through the palace to get some breakfast.

As the two men walked through the corridors of the palace, Caleb was astounded at the beauty of Varron’s home. Although the majority of the architecture was typical of a Middle Eastern setting, there were several things, such as the medieval tapestries and Victorian chandeliers that were hung on several of the walls and ceilings. It was as if the entire creative history of the human race was being celebrated all at once.

On several occasions, Varron explained the layout of the palace, particularly when they passed a doorway which was slightly ajar. The many servants and nobles that wandered in their direction offered their well wishes at their prince, and he inclined his head in response to many, whilst making small conversation with those he knew on a personal level.

Eventually, they came to a set of double doors that had golden brass handles attached. The borders were made of solid silver, whilst the main body of the door was a deep blood red that seemed to gleam in the candlelight. Caleb wondered if it would considered proper to knock before entering the presence of Varron’s parents.

The genie prince chuckled, and placed a comforting hand on his Hiraeth’s shoulder.

“You don’t need to be so formal when entering the dining room sweetheart. Just place your hands around the handle and pull. “

Feeling more at ease with the man’s words, Caleb reached forward to grab the silver object, and pulled with all of his might. Slowly but surely, the door opened wide to reveal a dining room that looked like it belonged in a fairy tale castle, rather than a palace.

The main table could easily have seated twenty, and each of the place settings were furnished with the finest silverware. Away from the long piece of furniture, there was a smaller round table that could fit six people. It wasn’t surprising that the bowls and plates on the larger table were made of gold, and that several gemstones adorned on the handles of the cutlery. This must have been where the rulers of the Northern Kingdom, as well as their inner circle, had their nourishment every day.

The door closed with a gentle thump behind Varron and his mate, drawing the attention of the man who was sat alone at the relative top of the table. He gave a wide smile, and then got to his feet.

“Greeting my son, I am pleased to see that your Hiraeth is up and about.”

On a side note, I would like to thank every member of the group who has offered me kind words so far. Your support and friendship mean the world to me. I hope you enjoyed everyone enjoyed this little snippet, and are looking forward to another brief glimpse as well as the final release.