We are now approaching the middle of July, so I have decided to post another Rainbow Snippet. For those of you who don’t know, Rainbow Snippets is a Facebook group where you share a set of sentences from a work that has LGBT related content. If you want to check out this great community for yourselves, be sure to check them out for yourself.

Before I start, I would like to thank Frozen-Tiger, an amazing artist who drew a picture of Phoenix Brannigan from Our Second Chance and Varron Sevarine from the Treasured series. In this image, Phoenix is being greeted by Varron in the palace of the Northern Kingdom, a few hours after Phoenix was transformed into a genie. The young green haired man is noticeably nervous about meeting the royal genie, but Varron is there to offer a warm and comforting welcome to the world that will now be his home. 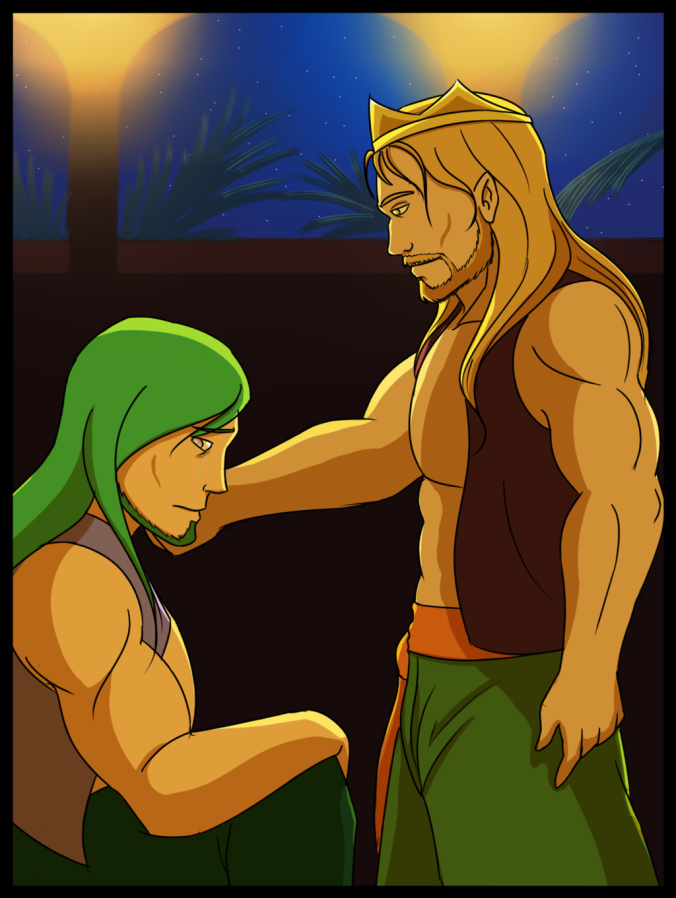 This week’s snippet is a visit to the world of A Treasured Bind, the upcoming sequel to A Treasured Find. This time around, we focus on Magnus and Ceispen, the rulers of the Northern Kingdom and the biological parents of Prince Varron, and August Oberanti, one of the royal couple’s nephews.

Before either king could deliberate further on the matter, a series of loud knocks pounded on the door of their bedchamber.

Magnus snapped his fingers, and the door swung open within an instant. To their surprise, they saw their nephew August skid into the room and crash into the unlit fireplace.

“What in the world are you doing pounding upon the door of our bedchamber?” Ceispen shouted at his nephew.

August swept the coal dust off himself and bowed deeply to his uncle.

“I am deeply sorry for the disturbance Uncle Ceispen, but I am afraid that unless you intervene immediately, a terrible event is sure to transpire.”

Before either king could ask their nephew what he was referring to, a flash of lightning and several rumbles of thunder shook the entire palace.

“Does it have anything to do with why we had this sudden tropical storm on such a beautiful evening?” Magnus asked, his tone curious with a hint of accusation.

“The storm was conjured by your son, as a way of venting his emotional state after receiving news of a traitorous nature.”

“Varron did this?!” Magnus eventually asked, waving his hand toward the torrential storm.

“What possible news could he have learned that would make him break one of our most sacred commandments regarding weather patterns for the Northern Kingdom?” Ceispen asked. His formal tone was almost lost, giving way to a hint of fear that he would usually deny existed in his emotional inventory.

August took a deep breath of resignation and explained the entire sequence of events to his uncles. When he had finished, both of the genie kings looked positively dumbstruck.

“Kerlaz withheld a letter from Varron’s Hiraeth for four weeks, and was about to throw the letter out of the palace?” Ceispen asked.

The younger genie nodded in response.

On a side note, I would like to thank every member of the group who has offered me kind words so far. Your support and friendship mean the world to me. I hope you enjoyed everyone enjoyed this little snippet, and will consider having a glimpse at the completed work.